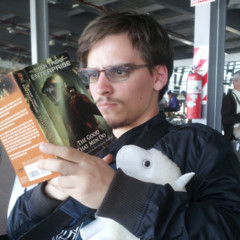 I've discovered the world of 3D modeling in 2008, when I was 14; and I've been doing it ever since, always learning and improving in any way I can.

In 2013 I started using Linux as my operating system, and soon after migrated my workflow to use open and libre software. I had become increasingly disappointed with the work being done by the bigger software players on the industry, which stopped innovating and instead focused on market retention.

Eventually I quit my old job as a Systems Engineer for a telco company, and jumped full time into my artistic endeavors, working as a freelancer and as a Blender instructor at a local university.

As for why I fell in love with 3D modeling, it all came down to a certain science fiction franchise and the ships that appeared in it, which motivated my imagination since I can remember being alive. That love for 'Star Trek' eventually lead me to design my own ships and bring them to life in my art. More importantly, it lead me to try and live by its message of peace and tolerance, to embrace diversity and think with rationality in mind. It made me who I am, and I pour from that back into my artistic creations.